Uber knows when your phone battery is low

Uber says you may be more willing to pay its extra surge pricing if your phone is low on battery. That’s because when you download the app, you give Uber permission to check your phone’s battery level. Uber says its research shows people, who are deciding whether to get a ride during peak surge pricing periods or wait until prices go down, may be motivated by how much battery is left on their phone.
WGNtv.com Link to Story

That’s because the company says its data breach four years ago was much worse than it originally thought. LinkedIn initially reported the data breach in 2012 affected 7 million people. But now the company says at least 167 million accounts are for sale online including 117 million passwords. The jobs site says it is working on notifying all affected users.
WGNtv.com Link to Story

CHICAGO– A Chicago suburb will soon be the home to five zip lines but it won’t be cheap to hitch a ride when it opens. Officials say the zip lines will start being installed next week and ready to use by the Fourth of July weekend. A two or three hour pass will cost adults $57 and $37 for the kids.
WGNtv.com Link to Story

Jimmy John’s wants to be known for its ‘freaky fast’ delivery service. But one employee at a Florida store may have taken it too literally. The Jimmy John’s delivery man was riding his bike on his way to deliver a sandwich when he discovered that a train was blocking his path. Instead of waiting for the train to pass he decided to pick up his bike and carry it over the train.
WGNtv.com Link to Story

Campbell’s to remove BPA chemical from cans by 2017

The world’s largest soup maker is making some major changes to the way it packages its canned products like soups, gravies, and broths. Campbell’s Soup Co. announced Monday it will stop using a BPA chemical in the lining of its cans by 2017. The announcement comes after numerous consumer complaints about the health risks associated with the Bisphenol-A in the cans liner.
WGNtv.com Link to Story

Months after a teenager died following the removal of her wisdom teeth, the dental board of Minnesota has temporarily suspended the dentist’s license as of Monday. “This is all new to us,” said the teenage victim’s father Steve Galleger, who was surprised the dentist had been suspended nearly a year after his daughter’s death.
WGNtv.com Link to Story

A Chicago man has been charged with the early August robbery of the owner of a Portage restaurant in his Schererville garage. Boldian III, 25, of Chicago, who worked at the restaurant, has been charged in Lake Superior Court with felony counts for robbery, theft and battery, according to a news release from the Schererville police.
The Chicago Tribune Link to Story

On July 25, Eugene Bynum Jr. got a call from his wife, Susanne, who told him that his daughter and grandson had disappeared from their home on Gary's West Side — a call that began an odyssey that continues for the Bynum family. "I've never seen anything like this before," said Eugene, father of Diamond Bynum, 21, who is developmentally disabled, and grandfather of 2-year-old King Walker. .
The Chicago Tribune Link to Story

Schererville police say charges could be filed against a 19-year-old Griffith woman as early as Tuesday after a fatal hit-and-run accident early Monday on U.S. 41. Patrol Commander Brian Neyhart said 54-year-old Joseph McInerney's Ford pickup truck broke down just south of the intersection of Woodhollow Drive and U.S. 41 about 2:30 a.m.
The Chicago Tribune Link to Story

Two months ago, Eugene Bynum Jr. said he was thinking about how he was going to celebrate his 46th birthday July 27 with his daughter and grandson. Instead, he got the "worst present ever." On July 25, Bynum's daughter, Diamond Bynum, 21, disappeared with her 2-year-old nephew, King Walker. The family said neither are able to communicate that they are lost or are in need of help.
The Chicago Tribune Link to Story

Four members of the Northwest Indiana Down Syndrome Association will be featured in the annual National Down Syndrome Society's awareness video in New York's Times Square. "This is the first time I've seen that happen," said Bill Buckley, the president of the local association, who said he is so happy to see that four local families and their children are creating awareness on a national level.
The Chicago Tribune Link to Story

Construction of a new sidewalk in Schererville, set to begin this week, has been put on hold after a resident found that it will run within feet of his property. "The path goes right through my back yard," said Mark Lambert, who said he bought his property two years ago on Burr Street for its privacy and doesn't want to see it be impeded by a new sidewalk.
The Chicago Tribune Link to Story
View More Stories

Previous news writing and video editing intern for WGN-TV, "Chicago's Must Watch Morning News".
Former producer and reporter at Blue Island Television.
Prior to TV, I was a general assignment freelance reporter for the Chicago Tribune.

Check out some of my work by visiting my website danzar.virb.com. 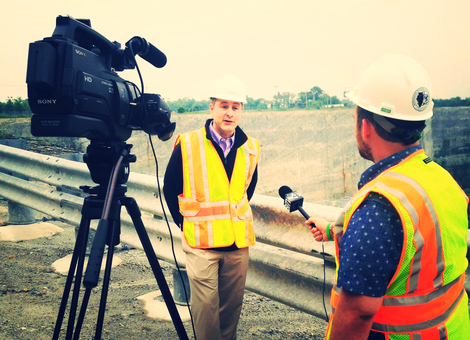